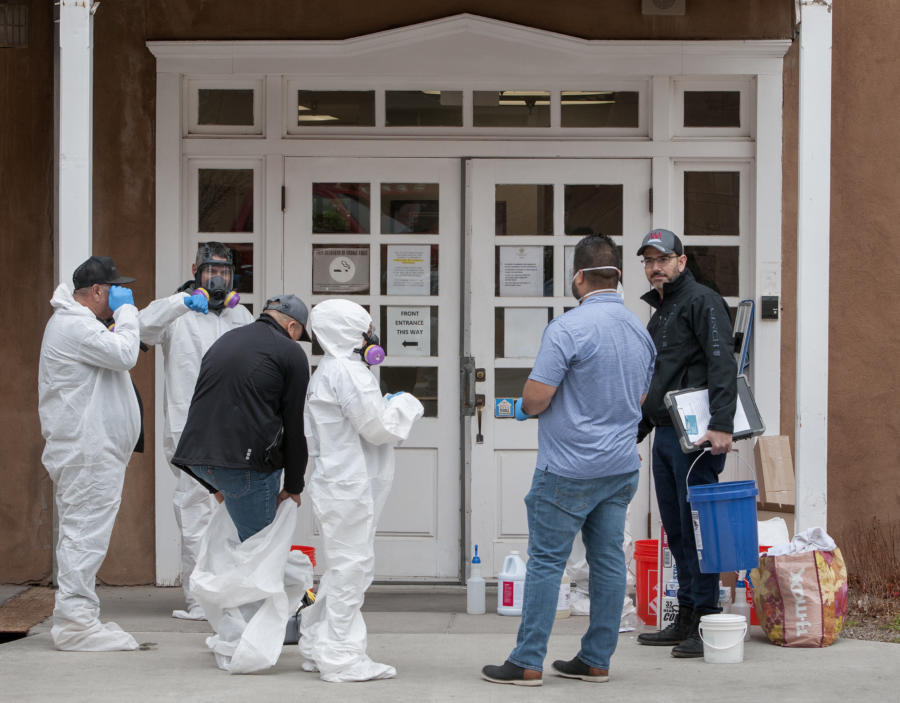 Cleaners with AAA Restoration and Construction Services get ready to clean the 1st Judicial District Attorney’s Office in Santa Fe on Thursday to prevent the spread of coronavirus. (Eddie Moore/Albuquerque Journal)

SANTA FE – Even a small change in how quickly infections spread throughout New Mexico could make a stunning difference in the state’s coronavirus outbreak, a state health official says.

But it’s too soon to determine how well the state’s stay-at-home instruction has succeeded in slowing the growth of COVID-19 infections, though there are signs that people are going out less, according to the state.

Dr. David Scrase, secretary of the state Human Services Department, said the math behind the spread of infections demonstrates the potential effectiveness of social-distancing strategies, such as staying at home and limiting trips to essential outings.

If each person with COVID-19 gives it to about one fewer person than they otherwise would, for example, it could add up to thousands of fewer cases in time, he said.

• Starting with a single case, if each person with COVID-19 spreads it to 2.4 other people over three days, a community would end up with 6,340 infections, based on rough estimates, in a month.

• With moderate social-distancing strategies, he said, the growth rate could fall to 1.7 people. Under that scenario, about 202 people would have contracted the disease after 30 days.

• With significant adherence to stay-home policies, the rate of spread could be slowed to 1.3 people. If so, just 14 people would have been infected.

The actual numbers will vary, of course, based on different assumptions and other factors.

But the examples, Scrase said, demonstrate the magnitude of potential outcomes based on what sound like small changes in the rate of spread. In the unrestrained scenario, he said, about 450 times more people end up infected than in the shelter-in-place example.

“That’s the idea on flattening the curve,” Scrase said.

The goal is to slow the growth rate enough so that hospitals aren’t overwhelmed with a sudden influx of patients.

Scrase and other New Mexico officials have used a chart called “flattening the curve” to illustrate the concept. The chart – a version of which the Journal is publishing – isn’t a specific projection of cases in New Mexico over a certain period of time.

Instead, it’s just an example of how different growth rates would allow the state to avoid an unmanageable spike in cases.

Gov. Michelle Lujan Grisham, meanwhile, is asking the U.S. Department of Defense to help New Mexico expand its capacity for treating COVID-19 patients. She requested deployment of a 248-bed Army combat support hospital to Albuquerque by April 10 or as soon as possible after that.

Dr. Marshall Baca Jr. of Artesia – where New Mexico recorded its first coronavirus death Monday – explained in stark terms how easy it could be to overwhelm the health care system.

In a recent letter published by the Artesia Daily Press, Baca said infection rates vary. But as soon as one person tests positive for COVID-19, the community might see, say, 10% of the population catch it within a short period of time, he wrote.

Baca is the medical director of the emergency department at Artesia General Hospital.

“It is estimated that 1-2% (up to 8%) of those who are infected will be critical, which equates to approximately 13-26 patients who will require critical care here at AGH,” such as use of a ventilator and an intensive-care bed, Baca wrote. “Given either number, Artesia’s medical system does not have the resources to care for that many critical patients and (it) will completely overwhelm our medical resources.”

People have a moral responsibility, he said, to take steps to protect the community, including following social-distancing and hygiene recommendations.

COVID-19 was just detected in December, and there is much scientists don’t know about the disease and its spread. It’s clear, nonetheless, that the virus is highly contagious.

Scrase said the state is working hard on modeling based on New Mexico’s data.

The state announced four confirmed cases of coronavirus March 11. In two weeks, the number jumped to 112.

The number of confirmed cases surged to 136 Thursday after 24 new positive tests came in. Thirteen people are hospitalized in New Mexico for COVID-19, state officials say.

It’s difficult to determine the spread of the disease based on positive tests alone. The state Department of Health has warned that there are people with the virus who haven’t been tested yet.

“The more it spreads,” Scrase said, “the harder it is to track.”

For most people, the symptoms are mild to moderate, and they recover within two to three weeks.

Older adults and those with chronic underlying health conditions are most at risk. The Eddy County man who died at Artesia General Hospital fit both categories.

New Mexicans should have a better idea in the next two weeks whether they’ve succeeded in bending the curve, Scrase said. But initial evidence reviewed by the state – such as satellite and ground pictures of automobile traffic – is promising.

“We believe from motion data shared with us,” Scrase said, “that there has been a significant drop in population movement and hopefully a resultant increase in social distancing.”

If so, he said, that would be a good sign for reducing the spread rate.

Get a Quote for Coronavirus Cleaning

This site uses Akismet to reduce spam. Learn how your comment data is processed.

Covid-19: We're Working - We are Open and Working Hard to Make Your Environments Safe. Get a Quote